The formation of Dunbar sailing club had an important effect on many young people growing up in Dunbar.

The story began with two craft – Black Agnes and Sinbad. Black Agnes was a Bermudan sloop owned by Robert Waddell, formerly from Eyemouth and resident in Westbarns, and Sinbad was a clinker-built open boat with an outboard motor, owned by The Rev Edmund Masters Ivens [1911-1998], Rector of St Anne’s church and Commodore 1967 -1970, also Life Honorary Rear Commodore. 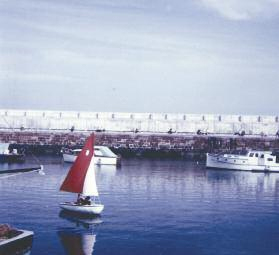 Sinbad went to sea with various crews of varied experience, particularly Albert Fuller, his son, Ian and many more Dunbar youngsters. Gordon Easingwood pays tribute to this experience in his contribution to this volume.  Edmund allowed the boys to play table tennis in St Anne’s Hall and snooker in the rectory during the winter months and this is remembered with affection. Sinbad I was submerged by heavy seas in 1969.

The club secretary recorded that Sinbad will be remembered by many [people] as their introduction to the sea. It was replaced by a Silhouette Blue Moon, renamed Sinbad II.   In his recollections Edmund commented on evening fishing for plentiful mackerel, catching them in such abundance that he went round the houses giving them away… ‘I remember one idyllic evening when we did just that though on that occasion I took them home to a delighted wife.’

These two enthusiasts formed the idea of forming a sailing club. They tried to find kindred spirits to get the idea off the ground and enlisted the help of Dr John Laurenson, [1927-1995], a local medical practitioner who was Commodore 1971-72. Meetings were held and the decision to form a club was taken in 1964. The chairman of the meeting and first commodore was Arthur KB Clarkson, a baillie on the town council. The new club had to face many difficulties, practical administrative and financial. The general feeling of the club was that it should not be exclusive but should welcome people with neither boats nor experience and it wanted to encourage young people, not only the families of members, but others in the community. To this end they contacted local youth clubs and the grammar school. Robin Forrest, the new PE teacher at the grammar school, joined the committee in 1968, as did Norman Macphie, [headteacher from 1970-83] and a group of youngsters including Pam Low, Brian Porteous, Ian Fuller, “young”Norman Macphie and Brian Robertson.

A grant was obtained from East Lothian Educational Trust and a Heron kit was bought. Lou Reece and others including young Norman built it. It was named Lou Lou. Robin Forrest, Albert Fuller and George Berrie agreed to be instructors. Another kit was donated by Dunbar Rotary Club and it was built on school premises, largely by Tom Hendry of the School technical department. It was named Rotarian. More boys were becoming interested and members became aware that the sea off Dunbar was not ideal for dinghy sailing and other locations were sought. Two which would have been ideal were denied – surprisingly, Pressmennan Lake was denied by Admiral Brooke, as was The Whiteadder Reservoir, despite a prime ministerial statement in favour of such use of public water. Much enjoyment including family picnics was found in the Tyne Lagoon at high tide.

By 1965 the idea of racing was being considered and Edmund Ivens presented the first cup. By 1967 George Berrie set up a racing programme. In 1970 a meeting was held with the Town Council to establish proper moorings. Having achieved this, John Laurenson stood down as commodore in 1972. Having established the sailing club, John was also establishing himself with a young family in Dunbar which soon became increasingly proficient at sailing. They started by sharing a wildcat dinghy and progressed, by stages, to Kintra, an Iona class Maclean 18’ craft which allowed for more adventurous sailing. They also had the Puffin (courtesy of Kellogg’s tokens), a light-weight, polystyrene rowing/sailing dinghy, which was sailed and rowed in the harbour area by young Ian Laurenson and David Lees, in search of “granny hutches”[sea urchins].

It was fun, a big giggle, friendly and unstuffy and a good mix of ages.

Over time, relations with other harbour users improved. At first, these amateurs were viewed with suspicion, being perceived as part of the gentry sailing fraternity, but in time it became apparent that this group was different and included many local people who could be seen in pulpit, surgery, library and elsewhere, and children and young people who were pupils of the grammar school. These young people gained a great deal from the club. Bruce Petrie, for one, put a great deal into it and benefited greatly from it. Many of them have moved away but some have remained long term members of the club. These former young people recollect that Dunbar Harbour played an important part in their lives. As one of them said: ‘It was fun, a giggle, friendly, unstuffy and a good mix of ages and an important part of growing up in East Lothian’.This account has been compiled by Stephen Bunyan, based on the history of the club Dunbar sails Forth, compiled in 1998 by Hilda Laurenson, about the time that the Club established its Club House at the Harbour. It reminds him how important the club was to so many people whom he knew in other ways, and to the development of so many children that he taught over the years as they enjoyed growing up in Dunbar.