Pencaitland’s regular festival of fireworks is slated to take place on Saturday the 2nd of November, starting at 7pm. Gates will open at 6.15pm.

Pencaitland’s regular festival of fireworks is slated to take place on Saturday the 2nd of November, starting at 7pm. Gates will open at 6.15pm.

Tickets for adults cost £5, £3 for a child or a family ticket costs £13 (this includes two adults and up to four kids). Under 5s get free entry.

You can purchase tickets from the School Office or by calling 01875 340 260. Tickets are also available from the Spar Shop, the Granny Shop, or at the gate on the evening. However, if you plan to come and support the event please try to buy before the big night to ease congestion.

Remember that all funds raised go towards many much needed and very necessary resources at Pencaitland Primary School.

Two local bands are set to rattle the rafters for revellers at an up-coming gig in New Winton village hall in aid of the community venue.

Two local bands are set to rattle the rafters for revellers at an up-coming gig in New Winton village hall in aid of the community venue.

Nine Mile Burn was formed in 2007 and used to be called White Noize. They now specialise playing blues with a jazz influence. Meanwhile the Domestics have two vocalists from Pencaitland in the form of Stella Birrell and Lynn Fraser. They were most recently seen in action at a fundraiser held in Pencaitland Bowling Club in February.

Funds raised at the New Winton gig are to help maintain the hall and keep it open for community use. Tickets can be bought on the door for £5. From 7.30pm on Saturday the 20th of April 2013. Cost of entry includes tea or coffee and a raffle. Bring your own bottle.

Fatherson play The Front Room in Haddington this Friday. The gig is the last in a series of live, acoustic music evenings held at the John Gray Centre with Lamp House Music.

Fatherson play The Front Room in Haddington this Friday. The gig is the last in a series of live, acoustic music evenings held at the John Gray Centre in association with Lamp House Music.

Fatherson are a three piece band from Kilmarnock. Currently based in Glasgow they have been making waves in Scottish music with a string of support shows and tours with bands such as Idlewild, Panic! at the Disco, Feeder and Twin Atlantic. This summer also saw the band play festivals such as T in the Park and Wickerman. The Front Room will be a chance to see the band perform an acoustic set in a more intimate venue.

The group won a Scottish Alternative Music Award for Best Rock/Alternative Band back in March and are now playing to sell-out audiences, including Edinburgh’s Liquid Rooms, Glasgow’s Garage and the Arches. They have a new single and debut album planned for spring 2013. you can listen and see them in action on the band’s YouTube channel.

Support comes from a local act, still to be confirmed, and the ‘Victorian Trout Conspiracy’… another band enjoying a faithful and increasingly large following. Usually a twelve-piece, this East Lothian-based ska band will perform with a smaller group to accommodate the venue.

The Front Room is a collaboration between the Council’s John Gray Centre and Lamp House Music. All bands play their own, original music.

Martin Simpson from Lamp House Music said: “Even before they went on sale, we had lots of enquiries about these tickets. Fatherson have a massive following. Lately they’ve been playing on a much larger scale – enormous tents and festivals – so it’ll be a real treat to see them play an acoustic set in such an intimate setting! The Front Room as a whole has been a great success and it’s fitting for Fatherson to provide the finale. It’s going to be a top night!”

Check out the latest events and activities across the county in the October to December issue of East Lothian’s Arts News.

Check out the latest events and activities across the county in the October to December issue of East Lothian’s Arts News.

Arts News is East Lothian’s guide to many arts events and activities that are on offer across the county.

East Lothian Council Museums are also hosting a range of events and activities throughout this month including ideas for families during the October break.

In this 20 page issue you can find out more about East Lothian’s celebrations for St Andrew’s Day; what’s on at the Lennoxlove Book Festival; how Scottish tenor Martin Aelred is making money for Mary’s Meals; and how the Arts Service has been supporting visual artists and craftmakers.

There is a particularly useful and quite extensive directory of local events, concerts, gigs and performances, plus details of arts and craft, creative writing, dance, drama, music and song classes, groups and clubs that are taking place.

You can pick up a hard copy from Brunton Theatre or various East Lothian Council buildings including libraries and community centres.

More music will be happening on the last Friday of the month in October and November. We’ll let you know the line-up when we get word. 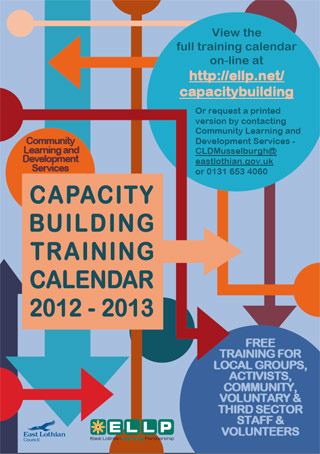 It provides information on free training for local groups, activists, community, voluntary and third sector staff and other volunteers. CLick the image on the right to view the PDF. Alternatively check out the East Lothian Learning Partnership Capacity Building Training website here.

UPDATE: We have the full document listing the learning and training opportunities on over during 2012/2013. Click here to view.

Do you run local events in or near Pencaitland? Send the details & ensure people know when it’s on & where with our free calendar service.

Anyone familiar with the pencaitland.org website will know that it includes a ‘what’s on‘ section for local dates and community activities. 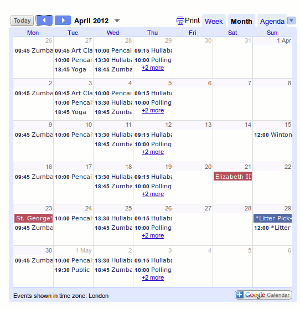 If you run or take part in regular events open to the public, such as kid’s playgroups or music and dance classes, don’t forget to send details of when and where to website@pencaitland.org. We will then include the supplied information in the public calendar on the community website.

So send us the date and we’ll do the rest…

Equine and country specialists Horse & Outdoor of Macmerry is holding a fashion show to raise fund’s for Edinburgh’s Sick Kids on 29 June.

Stephanie Malcolm, from equine and country specialists Horse & Outdoor in Macmerry, is holding a fashion show to raise fund’s for Edinburgh’s Sick Kids.

Taking place on the 29th June at 7pm, it’s being held at Horse & Outdoor located near Pencaitland at 21A Macmerry Industrial Estate. As well as the fashion show there will also be drinks, nibbles and a raffle.

As Stephanie explains, “We do fashion shows twice a year for various charities. We have always done horse charities but felt that the sick kids would benefit from our support. They are celebrating 20 years so felt it a great opportunity to get involved. We do a lot of non-horsey clothing for women, men and kids, so felt that it was a good way to get new faces in to see what we do and support a great cause as the same time!”

For further details you can contact Stephanie on 01875 824 298 or email Stephanie.Malcolm@horseandoutdoor.co.uk. Tickets for the event cost £5 of which £4 will go to the Sick Kids Friends Foundation. For anyone unsure of the exact location, there’s a handy map on the Horse & Outdoor website.

Hullabaloo’s pre-school music classes are held in Pencaitland & Haddington. Now there are plans to offer more in time for the new school year.

Many mums, dads and grandparents will already be familiar with Hullabaloo – Fun With Music!. It’s a Pre-school music and movement class that’s run by a local mum, Charlotte McMillan.

Classes are already held in Pencaitland and Haddington, but there are plans to provide more classes this August in time for the new school year.

As Charlotte explains, “Both drop-in sessions and bookable blocks of classes are on offer, and everyone gets the chance to try it out for free, so you’ve nothing to lose. Children from as young as a few weeks can come along and it’s a great chance to meet other children and their parents. So please come and have a sing-along with me, my guitar, my instruments and my friends. It’s usually good fun and a great social thing in which to get involved.”

There’s a new Facebook page especially for mums, dads and extended friends and family living in or near Pencaitland and other nearby communities of Boggs Holdings, New Winton and Peastonbank/Glenkinchie.

There’s a new Facebook page especially for mums, dads and extended friends and family living in or near Pencaitland and other nearby communities of Boggs Holdings, New Winton and Peastonbank / Glenkinchie.

Called Pencaitland Parents it’s hoped that over time it will become a useful message board for parents with kids of all ages to share information on both school and non-school events and activities in and around the village and other communities in the immediate area.

Of course, not everyone likes (excuse the pun) using Facebook. For those not so keen on it, we recommend following Pencaitland Parent Council on Twitter.