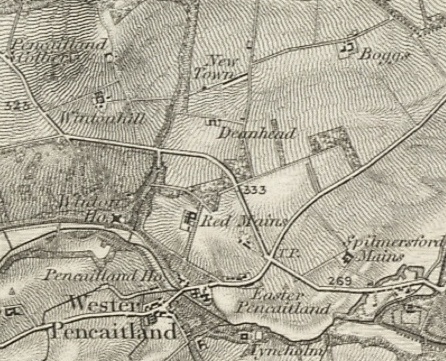 Pencaitland today is a prosperous village in the heart of some of the most attractive parts of the East Lothian countryside. The origins of the village date back to the 12th century when the parish church was first established. In 1505 Pencaitland was made a burgh of barony which allowed it certain rights and privileges including a twice yearly fair, and from 1695 a yearly mercat.

The following lengthy quotation about the parish of Pencaitland comes from the Ordnance Gazetteer of Scotland, edited by Francis Groome, published in London, 1903:

“Pencaitland (Cymric pen-caeth-llan, ‘ head of the narrow enclosure’), a village and a parish in the W of Haddingtonshire. The village, lying 271 feet above sealevel, is 3½ miles SE of Tranent, 5¼ SW of Haddington, and 1¾ mile SE of Winton station on the Macmerry branch of the North British, this being 13 miles E by S of Edinburgh. ‘The Tyne, ‘wrote Sir Thomas Dick Lauder in 1847, ‘ divides it into two parts, called Easter and Wester Pencaitland. Wester Pencaitland contains an ancient market-cross; but the most interesting and picturesque feature of the village is the old church, with its small octagonal belfry, in Easter Pencaitland, embosomed in a grove of tall and stately trees. We have long been in the habit of considering the manse as a gem amongst clergymen’s residences of the same kind. Situated on the sunny slope, amid shrubberies and garden stretching down the river, it seems to be the very nest of human content’ (Scottish Rivers, Edinb. 1874). Everard. de Pencaithlan granted the church to Kelso Abbey for the salvation of his lord, King William the Lyon (1165-1214); but John de Maxwell in the first half of the 14th century conveyed the advowson to the monks of Dryburgh, and with them it continued till the Reformation. The Pencaitland aisle is of pre-Reformation date; but the body of the church was built towards the close of the 16th century, the tower in 1631. As restored in 1882, at a cost of £275, it contains 480 sittings. In 1889 an organ was added. At the W end is a quaint epitaph ‘to the memorie of umqle. Ka. Forbes, spouse to M. Io. Oswald, Anno dom. 1639;’ and in the churchyard is an Iona cross to James, sixth Lord Ruthven (1777-1853). David Calderwood (1575-1650) the historian, and Robert Douglas (c. 1600-73), were ministers here. Pencaitland has also a Free church and a post office, with money order and savings bank departments, a parish library, a horticultural society, a Foresters’ court, and bowling and curling clubs.’ An elegant public hall has been built in Wester Pencaitland by Mrs Trevelyan of Tyneholm at a cost of £1200, in memory of her husband, Arthur Trevelyan, Esq., who died in 1880.

The parish, containing also Newtown village, is bounded ‘N and NE by Gladsmuir, E by Salton, and W by Ormiston, and NW by Tranent. Its utmost length from ENE to WSW is 4 3/8 miles; its breadth varies between 4 1/3 furlongs and 4 miles; and its area is 5075¼ acres. The TYNE meanders 5 miles east-north-eastward -for 2 1/8 miles across the middle of the parish, and elsewhere along or close to the Ormiston and Salton boundaries; Birns, Keith, or Salton Water flows to it 1¾ mile northward along the boundary with Salton; and Kinchie Burn, a feeder of Birns Water, runs 2 3/8 miles east-by-north ward across the southern interior and along the southern boundary. Beside the Tyne the surface sinks to 200 feet above sea-level; and thence it rises gently northward to 400 feet at Winton Hill, and southward to 479 near Fountainhall. Thus while it offers no marked natural feature this parish wears a pleasant English aspect, its well-enclosed, well-cultivated farms being prettily diversified with meadows and woods. The rocks belong mainly to the Carboniferous Limestone series. Coal, though lying on the outer margin of the Lothian coalfield, abounds, is of excellent quality, is found at a depth of about 170 feet from the surface, and is mined for the supply of the southern and southeastern district of the county and part of Lauderdale. An inferior kind is found at a considerably less depth. Carboniferous limestone, enclosing numerous fossils of the kinds usual to this rock, is also found and worked to a small extent. Sandstone has been worked in several quarries; and that of the Jerusalem quarry has long been celebrated, being of laminated texture, of a uniform grayish-white hue, and yielding blocks of from 20 to 30 feet in length. The soil is naturally wet and clayey, but has been greatly improved. About one-thirteenth of the entire area is covered with wood, partly plantation and partly natural oak and birch; nearly 200 acres are laid out in artificial pasture; and all the rest are regularly tilled. Pencaitland House, now a ruin, in the immediate vicinity of Wester Pencaitland, was the seat of James Hamilton (1660-1729), who on his elevation to the bench assumed the title of Lord Pencaitland. The estate of Pencaitland belongs now to his descendant, Mrs Nisbet Hamilton Ogilvy, whose seat, WINTON CASTLE, is noticed separately, as also is a third mansion, FOUNTAINHALL. Pencaitland is in the presbytery of Haddington and the synod of Lothian and Tweeddlale; the living is worth £229. Pencaithland public school, enlarged in 1887, at an expense of £1300, to accommodate 193 children, has an average attendance of about 80, and a grant of over £80. Valuation (1884) £7891, 13s., (1893) £7394, 7s. 4d. Pop. (1801) 925, (1831) 1166, (1861) 1187, (1871) 1320, (1881) 1107, (1891) 1125.”

For information about Pencaitland today look at the most recent Census data.