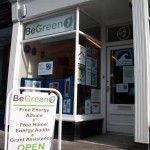 We set up an Energy Advice Service with a small team of advisers who were put through a thorough training programme. Up to 3 staff were employed on a full and part time basis to provide householder advice.

The service operated alongside the existing information service  operating from the drop-in  BeGreen energy advice shop (opened in November 2008), extending considerably the depth and breadth of advice provided. The audits and follow up reports are much more detailed and personalised than the Energy Saving Trust ‘Home Energy Check’ and have been very well received.

It took longer to build up interest in audits than we originally expected. Some of our initial attempts to recruit households for audits, such as a raffle, resulted in many people signing up who were not actually especially interested, and it then proved difficult and time consuming to secure audit appointments.

However, carbon savings from the energy audit service to date have been quantified and we estimate these to be upwards of 522 tCO2e per year.  These are detailed further in the section CO2 Emission Reductions.

More importantly, the energy audits have given households the information they require to make much larger carbon savings in the future once obstacles, particularly of finance, have been removed.

Many of those who have requested audits fall into two broad camps: households that are fuel poor and households that are already quite energy aware. We have been well-positioned to assist fuel poor households to cut their fuel bills and it has been particularly useful to have access to BeGreen energy efficiency grants for older people and those on qualifying benefits, who didn’t qualify for the Government Energy Assistance Package.

Both these groups didn’t necessarily have great scope for making energy/carbon savings, a range of factors including tenure, ‘hard to treat’ properties and access to finance being typical obstacles while the ‘already energy aware’ have limited scope for ‘no-cost’ behaviour changes.