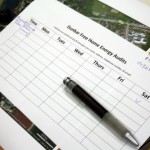 It has  proved more difficult to reach a middle ground of households, that often have plenty of scope for easy, energy saving ‘wins’ but for whom home energy is still not a priority. Such households may be relatively cash-rich, but time poor.

Partly in response to this we started our ‘neighbourhood energy assistant’ programme.  This was designed to help generate interest among this ‘hard to reach’ middle ground, by using a friendly peer to peer approach. The idea was to develop grassroots level energy awareness, give initial and basic energy advice, lend smart monitors, encourage neighbours to work together to consider and address carbon reduction in general, and also refer people to the BeGreen energy advice shop for grant assistance and for detailed advice from the energy auditors where required.

It was not our expectation that significant carbon savings would be obtained at this early stage, but we believe that tangible savings have been made through behaviour changes brought about by raised local awareness.

While personalised and impartial energy advice is essential, without easy access to finance and to suitably qualified, trusted and skilled local tradespeople, many households will not be able to implement the medium to higher cost measures that are actually needed to bring older housing stock up to the standard that will be required in a low-carbon future.

We carried out regular internal monitoring and evaluation of the Energy Audit Service against a set of objectives that we had set ourselves at the outset.  By the end of the project, we had scored well against all objectives except our original target of  reaching 1000 householders in each year.

In  retrospect, this target was clearly over-ambitious. It took time to develop a reputation, to find the most effective ways of reaching people and to build up demand, especially given the initially fairly low levels of awareness of energy efficiency as a priority. Developing a streamlined, user friendly audit process, internal systems and procedures, and website also took time whilst writing personalised audit reports and providing follow up support and assistance were also much more time consuming than originally anticipated. We decided that it was much more important in the early stages of the project to provide a quality, personalised service than to attempt to meet arbitrary numeric targets.