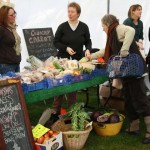 Local produce market at the 'Gathering In' community festival

This project was concerned primarily with building a common vision for change and delivering a programme of energy audits.  The direct environmental benefits, in terms of CO2 reductions are articulated above. Social and economic impacts are detailed below.

We believe that the process of developing the vision has contributed to building greater community cohesion and re-engaging and reconnecting communities through mapping their future. Testimony to this is the absolute number of individuals involved in the process, and the successes of events such as the ‘Gathering In’ community festival that we ran in October 2010.

Many different people were involved and at different levels, reaching hard to reach groups as well as people who don’t normally get the chance to express a view. The mapping and envisioning process, for example, involved a wide range of age groups within the community including children in primary and secondary schools, as well as reaching older residents. The participatory techniques used meant that all views could be expressed and recorded in a friendly and non-confrontational manner.

From a different perspective, grants and other forms of direct assistance through the BeGreen energy advice project were substantially targeted at people likely to be or at risk of suffering fuel poverty.

Although we did not quantify these, there will have been measurable economic impacts, some of these filtering directly into the local and wider economy as a result of households taking up the recommendations arising from the energy audits. More emphasis on reducing leakage from the local economy ought to be considered in future.

To an unquantifiable extent, some demand will have been generated for new energy efficiency services with some local businesses responding by moving into areas such as home insulation, the installation of micro-renewables, and so on. We expect this to grow.

Other measurable, but as yet un-quantified economic impacts include benefits arising from the setting up of social enterprises, which in time will produce locally important revenue streams.