Core paths are paths, waterways or any other means of crossing land to facilitate, promote and manage the exercise of access rights under the Land Reform (Scotland) Act 2003. Every local authority  in Scotland is required to draw up a plan for a system of paths (core paths) sufficient for the purpose of giving the public reasonable access throughout their area. Once adopted, the local authority has the power to maintain the path without obtaining the land-owner’s consent.

The East Lothian Core Paths plans can be downloaded from www.eastlothian.gov.uk/downloads/download/1402/east_lothians_core_paths_plan 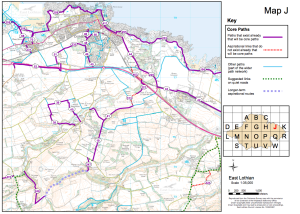 The East Lothian core paths plan is disappointingly disjointed and it is doubtful whether it gives sufficient access throughout the area. We would like to see more local paths adopted as core paths.