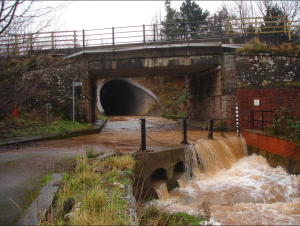 Water up to 30cm deep regularly floods the underpass at Brandsmill

The Brandsmill underpass is part of the East Lothian core path walking network. However, it is impassable for a large part of the year due to the culvert flooding.

Trash screens on the upstream side are supposed to prevent debris from blocking the culverts, but they are not cleared regularly so are often clogged up themselves. They have been ineffective for several years, and were fatally damaged in storms in 2013.

Transport Scotland (who are responsible for the trunk road network, and hence the structure of the underpass) have agreed to replace the screens with a improved system with safer access for cleaning.

Their contractors, BEAR Scotland, removed material from the area in January 2014, and experts have been reviewing the situation. 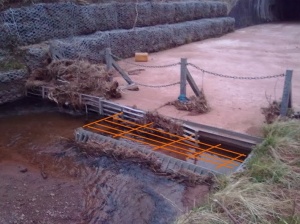 In the meantime BEAR Scotland have committed to checking the area and carrying out carry out works to remove debris as and when required.

This entry was posted in Brandsmill, News. Bookmark the permalink.