The story so far…

Since January, Sustaining Dunbar has been looking at options for attracting funding to create a safe walking/cycle route between Dunbar and the surrounding villages. We appointed a contractor, Crispin Hayes, who has researched viable routes and started negotiations with landowners.  Crispin and I presented these results to East Lammermuir Community Council (ELCC) at their meeting in June.

Since the report was produced, further discussions have uncovered reluctance on the part of the landowners to take this further at 2 key points on what was starting to look like the preferred route: Dunbar – Broxburn – Pinkertons – Innerwick. Also, the preference expressed by the Community Council for a tarmac path would double the estimated cost.

As a result, we now intend to look more seriously at one of the other options – a pedestrian/cycle bridge over the A1 at a point near the Innerwick road end. We hope to have an outline cost estimate and feasibility study to take forward by the end of the summer.

The bridge option has several drawbacks over the less ambitious earlier plans:

On the other hand:

Posted in News | Comments Off on The story so far…

Feasibility of Improving Access to Dunbar without a Car

Crispin Hayes, the consultant commissioned by Sustaining Dunbar to look into the of practicalities building a walking/cycling path between the Lammermuir villages and Dunbar presented the results to East Lammermuir Community Council (ELCC) last week. The feeling from ELCC was mainly supportive, though they lean towards a more hard-wearing surface which is likely to double to cost estimates.

East Lothian Council (ELC) have stated that they would prefer a bridge over the A1, possibly at the Innerwick road end, connecting up to the National Cycle Route 76 which passes to the East of Lafarge, Viridor etc. This is the feeling of some local residents too.

Posted in A1 Bridge, Brandsmill, Broxburn, News, Spott | Comments Off on Feasibility of Improving Access to Dunbar without a Car 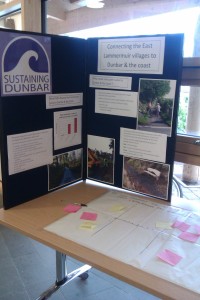 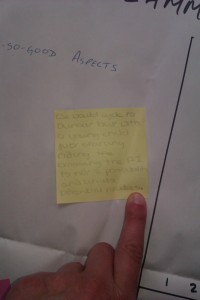 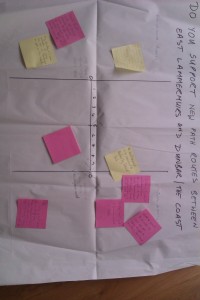 Posted in Events, News | Comments Off on Dunbar Civic Week 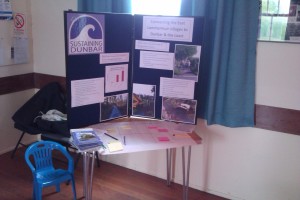 Innerwick residents got the opportunity to leave comments at this stall in the village hall on 7th June 2013.

Posted in News | Comments Off on Innerwick Community Cafe

While high quality local cycle paths are crucial to connect the villages to Dunbar, it will also be important to link with the (existing) long-distance national cycle route N76 which connects Berwick-upon-Tweed with Edinburgh, crossing the A1 at Dunglass (via a tunnel) and then back again at Torness where the level crossing feels very dangerous on a bike. Sustaining Dunbar is meeting with Sustrans (the charity which maintains most of the national cycle network) next week to discuss with them what they feel the best options are.

On 14th January Sustaining Dunbar met with  Transport Scotland (the government agency who maintain trunk roads such as the A1) to get their take. They promised to look into whether there were any planned upgrades to the A1 that we could work alongside to create a cycle path.  They produced a Transport Scotland report from 2010 which concluded that not enough cyclists used the Torness crossing for it to be worth making cycle friendly. I believe this is the report which some of us instigated back then, but we knew it would not be particularly enlightening as of course no-one uses the crossing because it feels too dangerous! The report is still in draft form, but if anyone is interested, we could ask for this to be formally published.

On 8th January Sustaining Dunbar attended a meeting of East Lammermuir Community Council to get some more ideas about the best options for making a footpath/cycling link between the Lammermuirs in Dunbar. The suggestions are listed below:

1. Continue the cycle path from Torness to the Spott roundabout on the south/west side of the A1. There seems to be some consensus that it’s easier to cross the A1 at the Spott roundabout as traffic is slowing there anyway. In favour: this would connect the houses at Little Pinkerton and others with the school at Innerwick. Against: a) would require co-operation of many landowners b) it is effectively running a new path parallel to the existing one past the cement works (national cycle route N76) c)paths are surprisingly expensive so this may not be the cheapest option

2. Build a bridge over the A1 at the Innerwick road end to connect with the old public road which then goes under the railway to connect with the N76 cycle path. (see attachment) If this option is chosen it will be important to connect the N76 with the bridge so that the long-distance route also benefits.

3. Build a bridge over the Dry Burn at Innerwick and continue a path to the tunnel at Brandsmill. This tunnel is sometimes flooded for long periods so may not be the best option. Also there are steps up to the designated path alongside the railway on the north side. Note: This option would have little benefit to people living to the south of Innerwick

It will be difficult to evaluate all the options without an idea of the relevant costs. Sustaining Dunbar is considering commissioning an ‘options appraisal’ to do this for us.

Posted in A1 Bridge, News | Comments Off on Connecting to long-distance routes (N76)

Initial thoughts on connecting Dunbar to Spott, Innerwick and beyond

The barriers of the A1 and the railwayline have always made this seem like an ambitious project (and expensive) but recently the Commonwealth Legacy Fund was announced which may help to make this a reality. There are also other options available.

Sustaining Dunbar is keen to promote walking and cycling as an alternative to car use, and has been producing local maps and collecting data on people’s travel patterns which will be useful when it comes to making a funding application. We are currently working with ELC to try and secure funding for a safe walking and cycling link from Dunbar to Whitesands and then onto the roundabout at Oxwellmains. This then joins the National Cycle Route (N76) where it runs alongside the railway past the cement works and on to Torness. A crossing from Innerwick over the A1 which meets up with this would make sense, but we need support to take this forward.  Please spread the word, and hopefully we can start the ball rolling.

Posted in A1 Bridge, News | Comments Off on Initial thoughts on connecting Dunbar to Spott, Innerwick and beyond

Following on from a successful family bike ride from Dunbar to Whitesands last month, it was suggested that a safer cycling route was needed along this route.

Sustaining Dunbar had a positive meeting with Cllr Michael Veitch and transportation officials yesterday. They’ve drawn up and costed plans for an off-road cycle path alongside the road between Broxburn and Whitesands, then up to the small roundabout (Oxwellmains) where the road joins the cycle path at the railway line before Lafarge.

ELC will also look at putting on-road cycle lanes on the 60mph stretch from Queens Road to Broxburn next year.

Posted in Broxburn, News | Comments Off on Dunbar to Whitesands