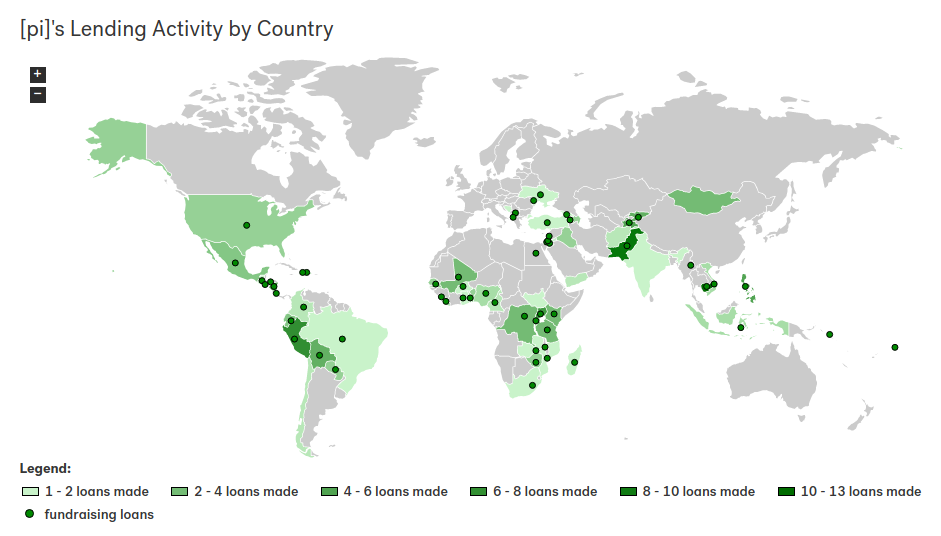 I started lending on Kiva – a social lending platform that links folk to needy entrepreneurs in the global south – way back in 2008.

Instead of buying presents for family at xmas I would buy a loan for them to manage.

The loans have supported 100s of individuals and groups. To save you doing the maths that’s over $6000 in small loans.

My outstanding loans today are now less than $250, alas, as I ended up needing a loan too.

My preference has been to lend to women, to groups and to spread myself around the world, as the graphic above shows. I have around 20 countries left that I have to invest in.

By lending small amounts and picking recipients judiciously – ie. you think they have a good business proposition and that they won’t spend it unwisely, you can ensure your default rate is low.

I’m a bit cocky as my default is still just 0.58% against the average lender’s 1.48%. Overall KIVA’s repayment rate is a good 98.92%! Delinquency or late payment, is a bit higher at over 8%. Mine is a quarter of that. You have to go to places like Zopa.com, a social lending venture in the UK, to get better rates than that, and bear in mind that Zopa only lends to Prime customers.

The thing to watch is the currency rate exchange rates, especially if you’re taking money out. Everything is done in US dollars so once in Kiva hands, exchange rate risk is managed by them. However, because I have tended to take money out at intervals when I needed it, I lost out if the exchange rate was unfavourable, which it has been on occasion!

Some years ago I thought it would a nice idea to set up a Lending Team on OurLocality. A good way to travel the world and get your kids involved in the life of others or so I thought. Not surprisingly I didn’t get many takers.

Funny how without celebrity backing some things, especially quiet philanthropy, is overlooked, but I suppose that is how it should be.