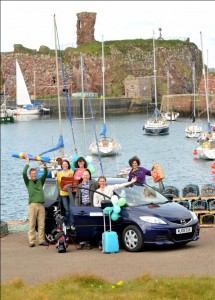 We supported the setting up and establishment of the SpareWheels Car Share Club, which is now an independent Community Interest Company which operates under the umbrella of CommonWheels.  The club launched in May 2011 with two cars and now has 30 members. The website: http://sparewheels.org.uk/  was set up and promotional materials designed and distributed. A third car is about to be obtained.

We are building up a good working relationship with local schools, particularly in the Dunbar area.  Last year we began to work with P7/S1 transition classes and this work has continued with the delivery of Independent Traveller Lessons to P7 pupils to encourage them to begin to use public transport as well as active travel to get around instead of lifts from their parents.  Comprehensive timetable information packs were prepared and delivered to each P7 pupil, and a lesson plan was prepared to enable class teachers to deliver the Independent Traveller lesson in the future.  We have also provided support to Dunbar Primary School and Dunbar Grammar School to promote walking and cycling through Walk to School Weeks and The Big Pedal.

We now run regular drop-in travel advice sessions in Dunbar and East Linton, as well as attending local events.  We have also attended several Neighbours Together meetings to provide travel advice, following up with more detailed information as requested.  We use local schools, libraries and the medical centre as outlets for our travel advice order forms.  Over 100 people have received one to one travel advice from this service; a copy of the travel advice record is included in the background documents.

Sustaining Dunbar has also produced a series of 18 factsheets covering a whole range of transport issues from a local point of view.  These are available at the travel advice sessions and on our website, and have proved to be a good starting point resource. At the beginning of Sustaining Dunbar’s transport work in 2009, lack of up to date timetables and information were seen as one of the major barriers to public transport use.  We have distributed well over 3000 bus and train timetables, and put the information on our website.  We are continuing work on improving local transport information and have been carrying out evaluation of such information with local user groups. The results of this work to date may be found at http://ourlocality.org/bybus/. We have also created on online opportunity for people to report on the condition of their local bus stops and bus stop information (http://betterruralbuses.org.uk). We have continued to support the Rural East Lothian Bus Users Group and to liaise closely with RAGES (independent rail action group).

As part of its travel advice service, Sustaining Dunbar also provides maps and information about local walks and recreational opportunities with the aim of reducing the need/desire to travel.  We have recently produced a leaflet of local woodland walks (with additional funding from the Forestry Commission Scotland) which has been distributed to local school pupils and outlets.  We also produced a website, online map and information showing local cycle routes to 30 artists’ studios for an Open Studios event.  This information has encouraged people to explore their local environment on foot and by bike rather than travel further afield by car for recreation. We also helped to create seating at the parents waiting area at new primary school (encouraging walking to school).

We supported Changeworks to run two ‘eco-driving’ sessions in Dunbar. 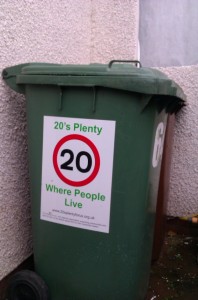 We launched a Living Streets/Twenty’s Plenty Group for Dunbar and instigated local discussion about 20 mph speed limits through the press and with, for example, large stickers for people to fix to their wheelie bins.  Our survey analysis indicates that only 12% of households were against their introduction in any form.  There was greatest support for 20 mph speed limits near schools and in residential areas, and 22% of households were in favour of 20 mph limits on all streets.  East Lothian Council has now agreed to work with us to investigate the possibility of introducing a trial 20 mph speed limit in residential areas to the south of the railway line in Dunbar.

Sustaining Dunbar recently organised a street design workshop for local residents in the Parsonspool area of Dunbar.  At this event, run in conjunction with Sustrans and East Lothian Council, over 20 local residents were involved in the design of a ‘shared space’, improvement scheme for their area.  This project was the first of its kind in East Lothian.