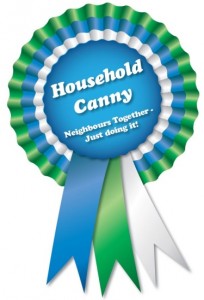 The Neighbourhood Transition Groups project was launched under the name ‘Neighbours Together’. A website was set up at: http://neighbourstogether.org.uk and other publicity material prepared and distributed through schools, resident associations, newspapers  and  other networks e.g. East Lothain Council Community Planning Partnership.  A baseline (‘Household Canny Challenge’) questionnaire was developed to assess household’s current carbon footprint, to assess households’ interests, concerns and support needs and to enable them to make pledges of actions they planned to take. Households pledged to reduce their CO2 emissions through a range of activities related to household energy, food, transport and consumption.  Each household was supplied with an action plan and with targeted information and support from our energy, food waste and transport staff. 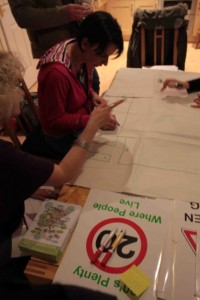 Support packs with information on Home Energy, Active Travel and Food were prepared and a ‘contact management system’ implemented to enable us to easily track and coordinate contact with households and provision of support. Where possible, clusters of participating households were encouraged to come together into ‘Neighbours Together’ groups, initially by finding hosts for ‘Neighbours Together’ gatherings.  Some of the activities which came out of the Neighbourhood gatherings include:  a neighbourhood Food/ preserve swap, draughtbusting workshops, living street plans, bulk buying of insulating curtain lining, energy audits and worm box workshop requests.  Several groups set up their own facebook pages –eg. Belhaven NT and are sharing and lending through  Streetbank. Four, village-scale Neighbours Together gatherings were also held in Stenton, Spott, East Linton and Tyninghame. 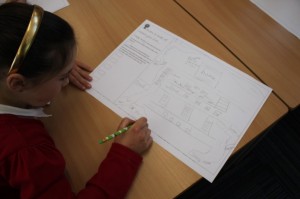 In October we started working with the village primary school in Stenton. This has proved a very successful way of reaching and supporting households. Following our workshop with the whole school (45 children from P1-7), children used the ‘Household Canny Challenge’ questionnaire with their families. This then led on to us working with the school to organise a ‘Village Together’ event in February.  The benefit to the school is that these activities help them to work towards achieving their ‘green flag’ as well as helping them to deliver the curriculum for excellence. We have since started using a similar approach with three classes (p4 – p5) in Dunbar Primary School.