It is almost here! 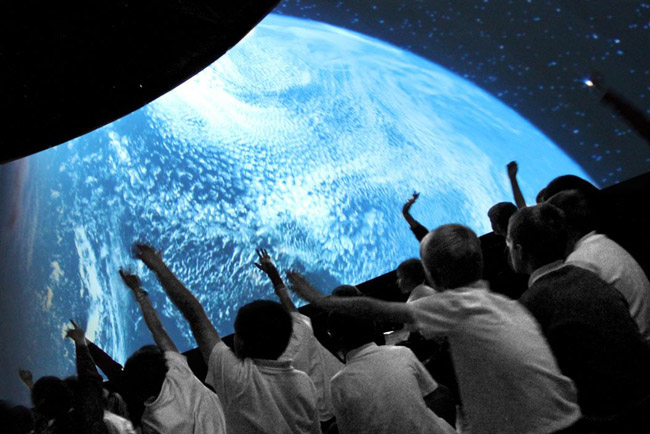 The trial starts this week and we are really excited.  We have a great line up of films both in 360 degrees and in standard film form and the Igloo will be open to the public all day on Saturday and Sunday 24/25 November.
We are hosting special events on Friday – Schools in the morning and Business in the afternoon.
We hope that as many teachers as possible will try to make it to the 10 and 11am sessions for primary and secondary schools.  The Igloo is proving to be a really exciting teaching space and this will give teachers a chance to see it in action!
The Igloo screen has been used by British Airways, Olympics 2012 and F1 (amongst others) to showcase projects and products. Technology has been developed to enable the Igloo to be used as an interactive training and gaming space.  On Friday afternoon, we want businesses to see the art of the possible.
We still have places for these sessions and anybody interested can get in touch with Pippa at shore.harbour@yahoo.co.uk.
The trial seems to have generated quite a lot of interest – even STV are coming down to film us set up on Thursday.  Very exciting!
Posted in News | Comments Off on It is almost here! 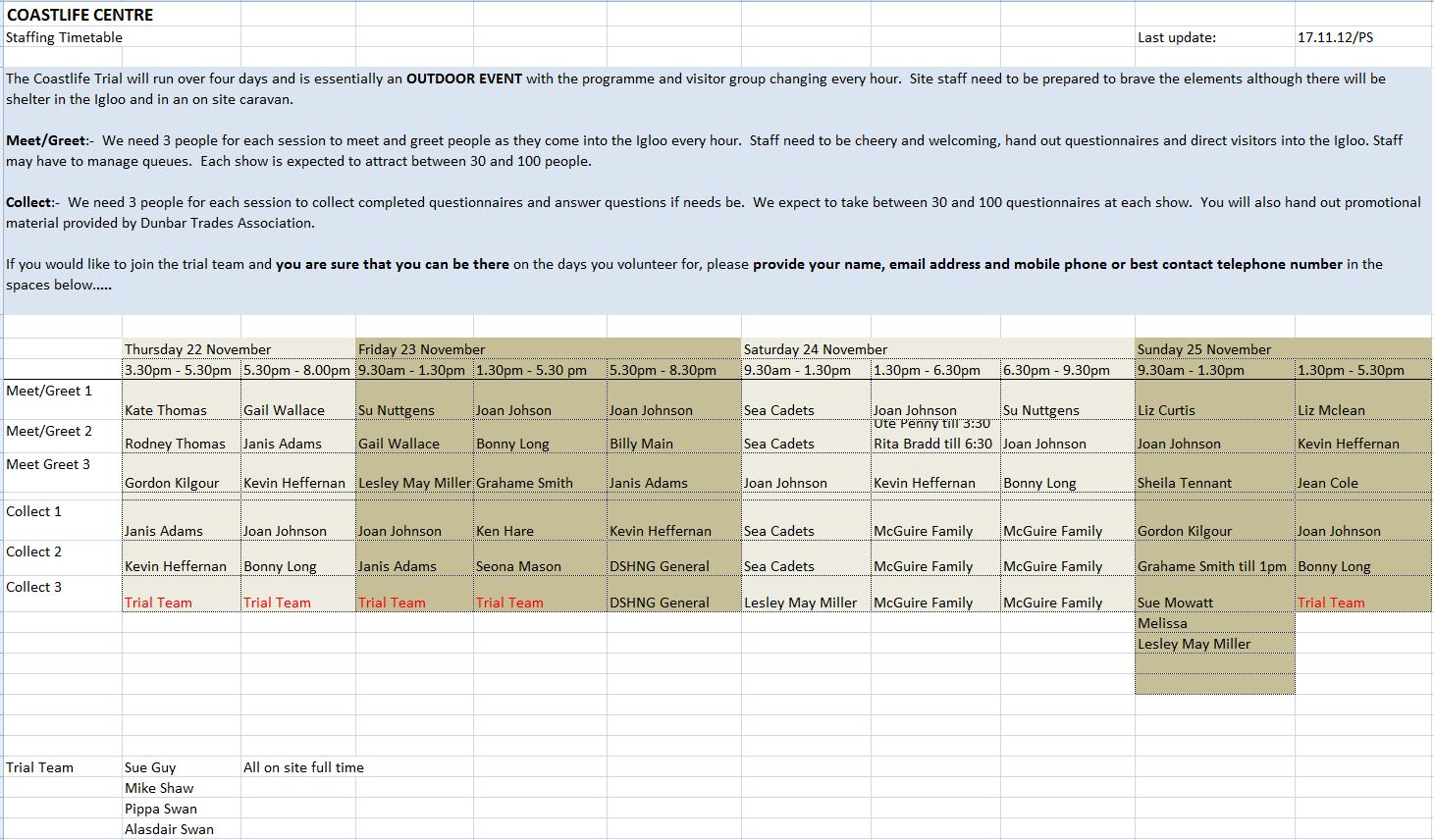 Please check your name is in the right place. If you can fill any gaps please email pippa_swan@yahoo.co.uk

Posted in News | Comments Off on Volunteers

Thank you everyone who has indicated they would like to help out through the Igloo Trial Nov 22 – 25th.

There will be an important briefing meeting for everyone who will be helping at the event – please come along 7 pm on Tuesday November 2012 at Dunbar Methodist Church Hall.

Posted in Events, News | Comments Off on Volunteer’s Meeting 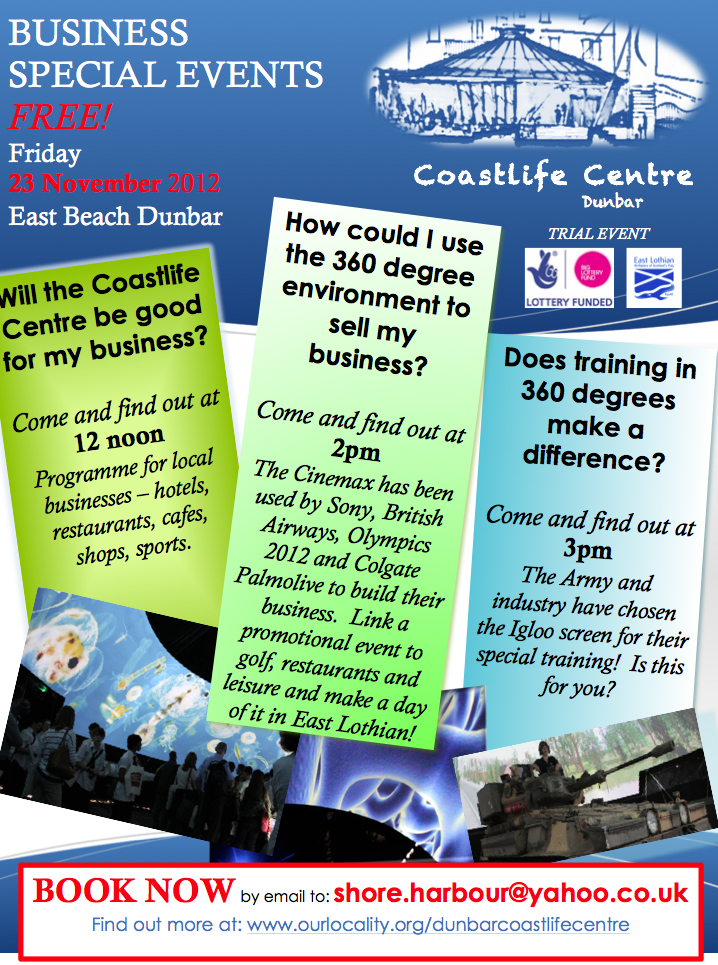 Posted in News | Comments Off on Open for Business 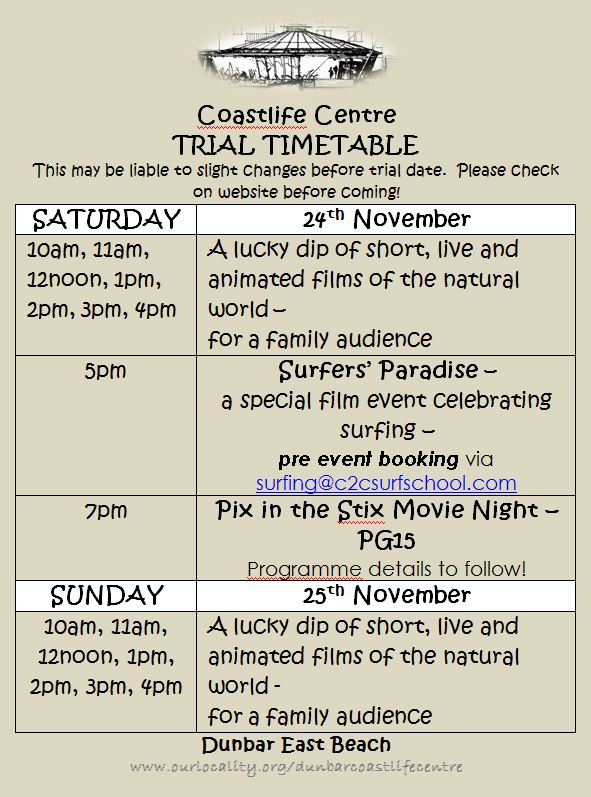 Posted in News | Comments Off on Show Timetable

HELP US TO FIND OUT IF THIS IDEA WILL WORK!

For one weekend only on

24thand 25th November you can come with the whole family to a free show in a temporary Igloovision 360deg cinemax at East Beach, Dunbar.

Every hour on the hour from 10am until 5pm you can see surroundsound films of the natural world and tell us what you think of our plans for a permanent building.  Spend the day in Dunbar and see the harbours, playparks, leisure pool and much more.

No on site parking – Come by train, bus or park at Community Centre, Lauderdale Park or Leisure Pool.

Dress for the weather!

Posted in Events, News | Comments Off on You are Invited :-)

Posted in News | Comments Off on Dunbar Coastlife Centre Video 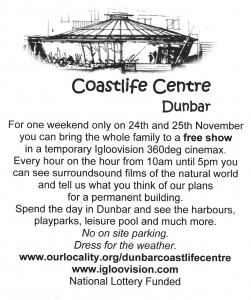 Mums and Dads of Edinburgh (MADE)

Posted in News | Comments Off on Coastlife Centre Advert – November

PLANS to construct an ‘igloo’ facility in Dunbar which would project films onto a 360-degree screen have moved a step forward – with a trial set to run in November.

The town’s Shore and Harbour Neighbourhood Group has been successful in a £10,000 grant application to Big Lottery Fund Investing in Ideas, which will pay for the installation of a temporary igloo for four days later this year.

The igloo will be installed on vacant ground on Lamer Street – the site of the former amusement arcade – where it is hoped a permanent facility could eventually be built, called Dunbar Coastlife Centre.

Pippa Swan, chair of the neighbourhood group, said: “We are absolutely thrilled with the grant offer from the National Lottery.

“Our preliminary discussions with the community council, our local councillors, Dunbar Trades’ Association and others have all been positive but a real life test is what is needed to understand whether or not a development of this sort on the amusement arcade [site] will be a good thing for Dunbar. The grant will let us do this.”

Igloovision will now bring a 12.5-metre cinemax igloo to Dunbar from November 22 to 25.

END_OF_DOCUMENT_TOKEN_TO_BE_REPLACED

Posted in News | Comments Off on In the news